Yesterday I had a last race. It turned out to be a race of 54km 1.15h. The course was too easy; a lap of around 3 km and only 3 corners. No wind. So basically it is very hard to get away and with these kind of conditions you know it will end up in a sprint. Why? Because there are too many guys who can bridge a gap when conditions are OK. It's not a 'survival' kind of race so the sprinters will be there in the end. And so it was. Ended up 12th. Let's forget it quickly. 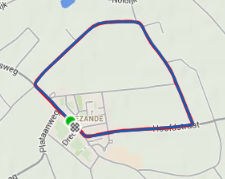 After 18 years or so I did a classic race again yesterday. It's called the Zeeland Classic and it's a race of 114km with 2 laps of 45km and 3 local laps of 8km. To be honest I did not train many 'base' kms / endurance kms lately so I was kind of affraid how my body would hold it after 1.5 hours (my training rides and crit times). The indicator at the moment wasn't too bad as I did a nice ride of 2 hours last Wednesday at 4.5w/kg. FTP is in the 310-320 range. Anaerobic power is at season's best. 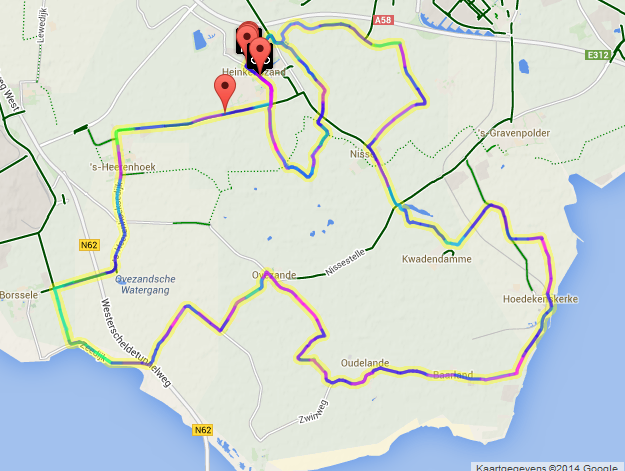 When you've ever done a classic race you know that it is quite a nerve wrecking thing. Everyone wants to be in the front and everyone wants to be in the right group (i.e. out of the wind). There was a fair amount of wind and of course everyone wanted to be in the front.....There were 147 participants and some are good at steering and some of them are not. My first objective of the race was not to hit the pavement and finish.
As soon as the neutral car (after 2 km) drove off it's quite hectic and you really have to just rely on people in front of you not to do any stupid things. Because if they do, before you notice, you're on the pavement. I must say I am quite good at peeping through every whole in the group and going around people without too much effort. Mind the 'too much effort'. I was really keen on not to move the legs when I didn't have to which resulted in 45% active recovery for the whole 114km.
There was quite some wind and there were several attempts for breakaways. But the thing is that there are a lot of guys who can race hard and can close gaps so basically every attempt was doomed to fail.
I was quite continuously riding at the first 20-30 rides which was good. The first lap went quite fast. 42.9 km/h with 239 AP and 278 NP. In that first round I also tried once in a group to ride off, but we were captured again just before the first time we crossed the finish line. The result of that was however that quite some people got dropped because of everyone riding after one another and that's not nice when you're riding in the wind.
The second round I tried again but again with no result. I didn't throw in a lot, because I already felt that it was going to be very hard to get away if you wouldn't get an initial 10-20 seconds. So after that effort I tucked myseld back in the group. The second round was done at 41.6 km/h, 204 AP and 237 NP.
Then the 3 local laps began and besides people who got dropped (and people who did hit the pavement or had flat tires) the group was still together. First lap was done at 40.6 km/h and 199 AP and 224 NP.
You could sense it became more nervous and to be honest at that moment I just wasn't alert. The whole race I had been riding among the first 20-30, but in that second round I let it go just a bit to let's say around position 40. A huge mistake, because 11 riders rode off just like that. My legs were still very good, but at the time I got in the front again they already had 20 seconds or so. I was riding by myself after a short attack and very quickly realised I was certainly not going to make it alone to that group nor any backup from the back showed up. Second lap went at 41.7 km/h and 218 AP, 257 NP.
By that time the only thing I focused on was staying in the front and to be as alert as possible. That is not trying to do too much work, but still try to rely on a good sprint since I did feel I still had a good one in my legs. Anyway, to keep it short I did do a good sprint - 4th of the peloton- and ended up 18th. Mixed emotions about it, but eventually I was OK with it.
So after 18 years, 18th place.

Next week one more race to go; season ends. Hopefully I get more time again to write some more on this blog, because lately I was simply too busy.

Race 8 was on the program. A race which I have also done a year ago to try again how it feels to race. I then ended up third. Total race time back then was 58 minutes., AP 247 and NP307. Now I raced a category higher, but last weeks I saw some nice improvements on the anaerobic side, because I did lack some of that for the crits.
It was a race with 3 corners and it was hilly. One side up, other side down. This for 40 laps which equalled 51km. Basically there was only one place to make a move: uphill. And so it went. 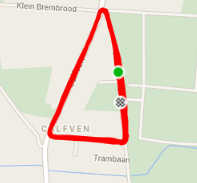 To keep it short. When the favourites went for it I was there. Was in a couple of breaks with them but everytime we were caught back, because we were not working together properly.
And again. Yes. When they went again (very hard) on the hill side I was just 6 meters behind them. The rest of the bunch was way behind. 6 meters became 7, 7 became 8. I knew that I wouldn't punch it out now they would be gone (3 of them). Damn, didn't make it; I broke. So frustrating!!! It happened after 43 minutes of racing when I was just recovering from previous efforts. W'Bal was trending up again and my HR was also going down. See below the picture. It happened at the arrow.....