It's a 'phenomenon' which I have also experienced. It's basically that uphill you just don't produce the same wattage numbers as 'easily' as riding on the flat. I experienced this the first time a year ago when I went up the Ventoux a few times. One time I tried to ride it fast as I could, but for some reason I just could not produce the numbers wrt my FTP at that time (apart from not being able to finish it because the weather went completely upside down along the climb). I could only average approximately 300 watts for one hour which is about 8% lower than FTP at that time. That ride was my 4 th ride up the mountains when I was in that region.
At the moment a similar discussion is going on on the wattage group. Several possible reasons for this are brought forward. I have put them below (most of them come from Alex Simmons, Bill Black, Nathan Townsend, Tom Anhalt,and if I have forgotten someone sorry!):
1) Different cadence / forces which lead to different application of musles
2) Different angles / joints which causes body position to change and can cause a power compromise
3) Forward/lower torso position requiring more emphasis on hip-extension (vs. knee-extension) for commencement of pedal stroke over the top and into the power-phase
4) Climbing recruits greater calf muscle activity (plantarflexion) across the bottom of the pedal stroke and consequently, slightly more force is applied through the bottom of the pedal stroke (approx 135° - 225°) which contributes to the overall power production throughout an entire pedal stroke
5) Longer tibia relative to femur equates to better climbing power relative to flat-land power. 58:42 femur to tibia length seems to be the norm ('correlation' instead of causation)
6) Different air flow / cooling
7) Power meter error and/or system biases (e.g. error due to non-round rings on crank based meters is amplified on climbs as the crank velocity variance within each pedal stroke increases)
8) Psychological / motivational factors
10) Difference between power-speed relationship on flat v climbs giving different feedback to the rider: More concentration required on the flat to maintain power
11) Different inertial load = different acceleration profile per crank revolution (it’s about double or more on steeper climbs compared to flats) = different feel and neuromuscular demand
12) ''Kinetc energy argument (energy of motion): when Climbing you have low kinetic energy, traveling slowly, gravity holding you back: your motor patterns are significantly different between time trialing and climbing. There are subtle differences in how a rider moves his or her legs and the speed at which he or she moves them. The pedal stroke is not uniform. There are many accelerations and decelerations throughout the movement which are dictated by the load'' (last part from http://cyclingtips.com.au/2013/09/climbing-and-time-trialling-how-power-outputs-are-affected/)
A list of multiple possible factors and hence probably not one factor being the only one that plays.

However as you also might see for yourself that indoor vs outdoor FTP may differ (for different reasons) climbing FTP vs flat (time trial) FTP may also differ. However adaptation (read improvment) will certainly come when training under those circumstances; I do not doubt that. I cannot prove it, but I think a lot of you will underwrite that if you live in a flat country and when you go and ride uphill the first few times it just feels different and it feels like you have to work your whole body; your body position (hands on the bar), different cadence, different forces on your body / legs, pedal style is different, adjustment of breathing (or at least more aware of breathing): in all it's just different.
As someone also put it: Performance is relative to the theater of performance. I will add to this that practice makes perfect.
Note: I did not take into account a possible loss of performance due to the altitude of the mountains, which might also play a role

Just a very short story from the Trois Ballons which I rode last Saturday 14-6-2014. I did reach my goal of riding it between 7.15 and 7.45h. I ended up with a time of 7.15.34 (217km), 213 AP / 248 NP / 431 TSS / IF 0.77. This meant place 156 and 80 in my age category 30-39 (I'm 36).
So in terms of goal setting it was thumbs up. But there was more to it and end of the day I did have mixed emotions about my ride. I did not achieve my wattage goals for the hills and I had a terrible breakdown after approximately 4 hours (hey, that sounds familiair) from which I did not really recover that well.
Anyway. I have had a powerfile from another blog reader who was so kind to share me his powerfile. He ended up with a time of 7.02.07. I will make a comparison with his data and mine in a next post (Trois Ballons long version) and I will give insight on where and (probably) why it went wrong. After that post I hope to describe my planning for the rest of the season. This will however take approximately 2 weeks since I am on holiday now and I don't have the proper tools with me to show stuff....But more importantly, I am spending quality time with my wife and children. 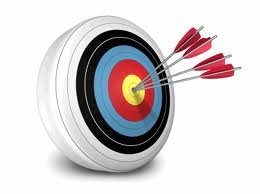 Exploring with a too big gear

Yesterday we arrived in Le Thilot, France. Today I did a ride just to explore some of the climbs we have to do for the Troi Ballons ride. The climbs were Col des Croix, Col des Chevreres and Ballon D'Álsace (in total the ride was 80km). Because basically the whole last week trainingplanning was messed up by the bad weather in the Netherlands I couldn't do the ride at a too great effort otherwise I would not be fresh on Saturday. Also given the fact that on Wednesday morning I did a small ride before we went to France I would push up my training load to much in a short time.
The ride did not have the TSS I wanted (120) and ended up at 180. Well then. I discovered that of those three climbs Col des Chevreres was the worst. Why? Because it is quite steep the last 3 kms and my gear is not quite suited for that. That is, I ride at a cadence of about 50 on the steep parts (14.5%) and it is just horrible. I really really have to push hard to keep riding. Also knowing that at near the end of Trois Ballons is a climb with also 16%, I think I am gonna have a hard time. But I am not gonna change my gearing just for these two parts, simple.
I did Col des Croix (3km) at 316 watt , first 6km of Col des Chevreres at 280 watt, 3 km steep Col des Chevreres at 300 watt, (30 min in total) and Ballon D 'Alsace (10km) at 260 watt (31 minutes). In all it was a nice ride, with some learnings on:

1) an indication on some of the climbs: were are the steep parts / road conditions

I probably did the Col des Chevreres at the wattage I will also do it next Saturday. Or maybe just push a little bit harder because of the adrenaline. Col des Croix was done at a wattage higher than I will do on Saturday; now it was the first and on Saturday that climb is more near the end. I did Ballon D 'Alsace slower than on Saturday (I hope).
Some stats:

On Saturday (not taking account my short spin ride for tomorrow / impact is also negliable) my CTL will be 70, ATL 66 and TSB -4.
Tomorrow I am going to explore some more climbs by car, go and get my number for Saturday, some short spinning, prepare my bike and take a rest. And hope for good legs on Saturday. And please, please no cramps.......
Posted by Ruud_G at 6:47 PM No comments:

The last week. Tapering but not too much

A week before the Trois Ballons now and (not knowing whether the rides turns out good or bad / reflection will come later) I just show you my last week (planned) w,r,t ATL and CTL. Below you can see the picture: 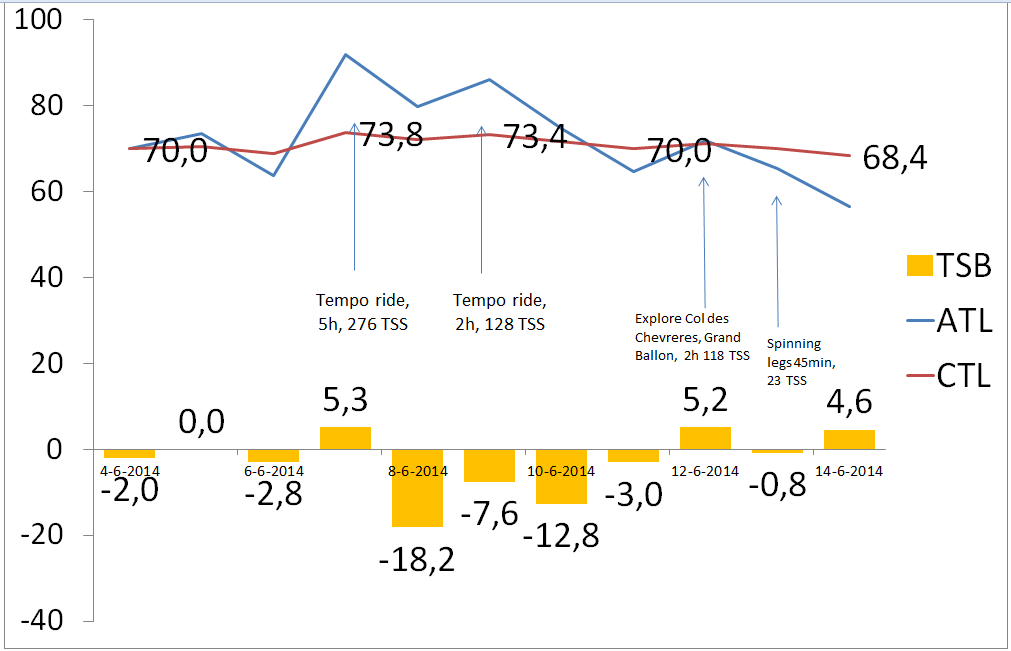 Let me first explain what my goald is w.r.t. TSB for Trois Ballons day (14-6-2014). Basically I know from the past that my best performances come from TSB ranges just below 0. That is, CTL - ATL <0. Now these best performances mainly come from efforts of 1 hour or just a bit longer than 1 hour. In this case the effort will be around 8 hours so I am trying to end up at or just above 0 on Trois Ballons day. With that in mind I planned backwards.
Yesterday (7-6-2014) I did the last longer tempo ride which 'bursted'the CTL upwards a bit. Also got cramps again so that sucks. On Monday I will do another tempo ride for 2 hours or so. After that I cannot do anything on Tuesday nor Wednesday (ride to France). On Thursday 12-6 I will go to explore the Col du Chevreres and the Grand Ballon. This will push the TSB a bit down and on Friday some short spinning. On Trois Ballons day I should be fit and relatively fresh.
I really hope my main enemy for longer rides (>4 hours) called cramping won't come up........
For that I just bought some new stuff called Go2 AC+ Anticramp drink. Hopefully it works, but probably I fell (again) for a marketing trick.

All or nothing. Nothing....

Yesterday I rode the BWF amateur championship. A race on a course of 5.2km with 4 corners, broad roads and no wind at all. That's basically a recipe for a mass sprint in the end and that's what it turned out to be. I raced most of the time at the front at the first 10 riders so that was good. If there was an escape attempt I was at it or in a position to close the gap quickly. In the final lap there was an attempt of a few riders in the last 2 km or so and I was with them. Then someone from the back came along very very hard and I did not hesitate and went out all or nothing to go through the last corner first. However, the last corner was still 100 meters away and although we did get a small 20 meters or so it just wasn't enough and you get that image (which you also know from the Tour de France) that you see 2 or 3 riders in the final camera position and the mouth of the sprinting peleton opens and just sucks the riders in...... I did not sprint anymore and gave it a day. All or nothing, this time it was nothing. Maybe next time all ;)
Next time will however be in a month or so. This weekend I am not gonna do a race. Instead do a long tempo endurance rode of at least 150km ( I will strive to do 200). And next week Saturday it's Trois Ballons in France.
Some race stats:
61.7km, 41.9km/h, AP 262, NP 292, VI 1.13, TSS 127, Aerobic Decoupling 5.9%, burned 34 matches. In all it wasn't the hardest race. Below the last minutes of the race.

Approximately -1300J W'balance at the end when I stopped the effort and let it go. Maybe I don't go to deep, maybe I am a sissyboy, I have no reference but maybe someone else has a clue how deep to go or you can go; it's probably also a mental thing seeing the last corner and THINKING you won't make it and stop pedalling........
Posted by Ruud_G at 8:28 PM No comments: