This weekend I’ve just done a small endurance ride with my brother. Numbers are (of course) not very impressive, but that’s normal with this kind of rides:


For some reason these rides feel hard to do. I feel my body is just not used to riding at a slower pace. Probably because it goes to fat burning mode.


Halfway our ride I almost got decapitated. When I looked up I could see why. A bunch of geese flew over us and (at least) one of them felt he had to drop something. I got to say that from that height it’s quite a ‘bang’. Good that I was wearing a helmet. Unfortunately the cap did not come out clean out of the wash.


Anyway. I’m making steps with my planning format although I still haven’t got exact raceday dates. End of this week I can put it online.
Posted by Ruud_G at 2:17 PM No comments:

Group ride and revision of goals

Today I had another ride for fun. 60km, AVP 208, NP228,IF 0.77,TSS 94 (Endurance zone). The weather was good, and this was basically my first group ride with a group from Belgium. They were cruising on 32 km/h which was just fine. I chatted with someone most of the ride which was nice. He did 12 times L'Alpe D'Huez in 24 hours. Not bad ;), especially not considering his age (mid 50).

I never do grouprides, but from an endurance point of view it does not need to be that bad. Especially not if you do for example 40km yourself and then 60km with a group (which of course rides at such a speed which makes it endurance zone training). The other also holds when you want to do a hard training. First go hard yourself for a while and then intervals by riding at the end of the group. At every corner you can get out of the saddle and there you go.

I am still kind of struggling with my training schedule towards the end of 2013 and full 2014. Apart from exact dates of cyclosportives/races I find it hard to find good input on the internet to actually make a good planning. End of the day I am also a time crunched cyclist, but if I read stuff about Carmichael, I basically get interval, VO2max efforts. That did work for me last year, but with a cyclosportive of 8 hours that won't do the job. Wrt planning trainingcycles is still something I have to dig in a bit more given the time periods I want to peak. I've read you can peak for two periods a season and that's about it.

Basically I also have to adjust -or better- improve my goalsetting. Its not very specific. It does not say anything if I want to ride Trois Ballons in 7.45h. What if the weather conditions are bad, etc. I can better state the goal in something like, be in the first 300, or do all climbs with at least an average power of 260 watts. I will follow Sir Bradley Wiggins strategy which is based on saying: I will hold X watts for 1.05 hours. In my case I want to ride all the climbs with an average power of 260watts. What it will mean in terms of hours of riding: I have no clue!

In races I cannot use the ''I want X watts on average'' strategy since more factors are at place. So I will keep it on being first.

So here an other attempt for my goals (SMARTER now I guess):

First moral pusher came in: my new Castelli Gabby Jersey! For those 'fun' rides in the winter.....;)

First ride again since holiday. Weather was OK, a little bit of fog, but the roads were terrible. A lot of mud and dirt on it. Currently I set my FTP on 300, but I should put it down a bit to 290, because I have no form anymore after two long periods of non-riding. I aimed to ride at the high end of endurance so that is what I did. Here's the summary:

My HR is quite high for the intensity of the workout, but that's normal because I have no form. I once did a lactate treshold test (2 years ago) and it said my lactate treshold HR is at 150. At that time I did 250 watts. Two years later my FTP is 325 when I train (and I aim for 340 next season).

Meanwhile I am working on my trainingplan for end 2013/2014. I am constructing an Excel in which I put in different metrics like AVP,NP,TSS,CTL,ATL,TSB, etc. so I can simulate my schedule. I have contacted some other bloggers and they were so kind to send me their setups. Combining things I see from them and my own wishes / level of detail I am 'Excelling'. Once it is finished I will publish it so someone else can use it as well.
Posted by Ruud_G at 9:36 PM No comments:

Well. Got back from holiday. My fitness wasn't good anymore anyway, but now it's completely gone I guess. My weight went from 70 to 72. O well. In a week or two I will be back on 70 so no problem.

With respect to the fitness.....next two weeks will be 'to get used to the bike' again and by then I hope to have a good overview of -at least- the first 3 to 4 monthts of training. Including numbers like TSS, ATL and CTL with I would like to incorporate in my training schedule. Still looking for a good Excel though in which I can actually put in the numbers. Below in a way which I would not prefer to do it too much anymore :)

2013 season is over. It's time to look ahead, time to look at 2014. Last year left me with a bad feeling. That is, I had two goals: 1) be first in our local championship and 2) to get my FTP to 320 watts (on a 60 minute test). I managed to reach goal number 2 with 325 watts including a decrease in weight from 73kg to 70kg, which of course is good for climbing. I could have done better because the last 10 minutes I had a terrible road on which I had to coast a lot since there were a lot of stones on it and I did not want to mess up my bike.

Goals number 1 I did not reach. Why? Simply because a week before the championship I got ill due to a bacterial infection in my elbow (which turned up in a little wound I got when I was on holiday) . I was in the hospital for almost a week and I got antibiotics for a period of 3 weeks. Needless to say that besides resting all the time the antibiotics also completely ruined my fitness. So, no championship for me after being 2nd and 3rd last 2 editions.

Just for the feeling I tried to win an other race which was 3 weeks after my last week of antibiotics. This was just a bridge too far. I had no power in my legs in those 3 weeks of 'building' up to that race. Also in the race itself I had no power (it was uphill, downhill, uphill, downhill, etc. in a 1.3km 'triangle'). Normalised power was 309watt. I finished 3rd in the sprint, but in all honesty when I would not have been ill, I would have won it (not to brag).

What did I learn from this season? It makes no sense to just set two goals of which one is dependent on  many situations and is just one occassion in the season. The dissapointment it leaves when not achieving it is just too big and one needs something to look forward again. So this year I am going to do it differently.

I decided to do races again. Cycling just makes me feel good and something inside just screams for competition. The hurting of oneself during the race, hanging on for dear life, hurting someone else, being outside, the feeling after the race. I just love it and I need it. This of course also has an impact on my family life. We will see how it will go, but if I cannot manage it with my family I will have to do a step back on my goals.

Well, that brings me to the goal w.r.t. racing. I want to win 3 races this year of which 1 would be the local championship. The other is a time trial on a normal race bike. I do not have a time trial bike so competing against those guys is useless. O yes, the category I will be racing in will be quite mixed, sometimes amateurs, sometimes a different category for which I do not have an appropriate english term. The last race of three is one still to be decided on ;) Its only 2013 so I still have time; I do not even have the new race calender.

The other goals I have is one in the category of cyclosportives. I would like to ride the Trois Ballons Master (218 km) this year in 7.45h. What that specifically means in watts I still have to find out. Here the family / sport balance is delicate since training for long rides like this just takes a lot of time.

The third goal I have is to be able to lift my FTP to 340watt on a 60 minute test. This will of course also help me in the time trial (although that one is only 20km I think) and combined with weightloss to 68kg will pull my watt/kg on FTP to 5, which can be helpfull in the Trois Ballons. In that respect the third goal is the first goal beceause it will be the basis for the rest of my goals

So here's the summary:

3) Win 3 races (local championship, time trial and one to be determined)

As is normal with goalsetting (at least ambitious goalsetting) goals can be adjusted during the season. I hope upward ;)

Now its time to make a good planning. That will take a few more weeks, but I will elaborate on that more in next posts.
Posted by Ruud_G at 9:00 PM 4 comments: 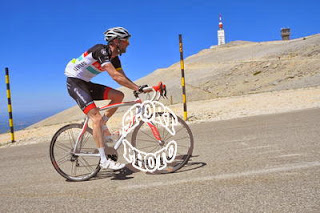 Hello,  my name is Ruud. I have the intention to write some of my experiences with training with a powermeter. This is based on things that I read about the subject, but most of all I try to bring this in practice. Also I will share my files. It would be nice to have comments so I can also learn new things, because I am a layman when it comes to training with a powermeter.

One of the resources I use right now is the book 'Training and Racing with a Powermeter', by Andy Coggan and Hunter Allen. I have also attended a one day powermeter 'course' by Hunter Allen. The rest of my inspiration I get from the google wattage group. That's a very big source of theoretical (scientific) knowledge AND practical experience. Furthermore on the internet there are numerous sources on the subject.

On the commercial side I often read DCRainmaker's site. This is a really good site and also puts things into layman's terms instead of having the focus on science.

The setup of my bike for spring/summer is (currently):

To register the things that matter I use:

And for fun I send to my stuff to Strava:

The setup for the winter:

I use Trainerroad which calculates virtual power, because I put my X-fire on Kurt which does not have a powermeter.
Posted by Ruud_G at 8:34 PM No comments: